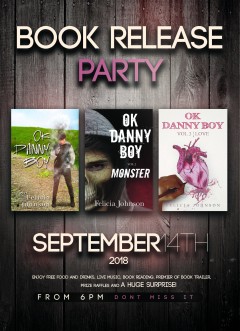 Please join us for the book release party of
“OK Danny Boy” volumes one, two and three.
Friday, September 7-9pm at the Paramount 2245 Idlewood Rd, Tucker, GA 30084.
Along with the public, Felicia invites survivors, families, friends, colleagues and associates of those who deal with mental health issues on a daily basis to come share their perspectives on the topic.
Attendees – including those suffering from mental health issues and their friends and family – can glean insight into the minds of people who struggle with mental illness from these powerful and compelling stories of hope and survival.

Author and Motivational Speaker, Felicia Johnson, invites the community of parents,educators and consumers to a free Public Book Release Party on youth advocacy, mental health and wellness with the follow up to her first best selling novel “HER” and the release of the spin off trilogy called “OK Danny Boy” volumes one, two and three.

Felicia Johnson is a best selling author, sought-after speaker, youth mentor, mental health advocate who readily engages an audience with the moving story behind her latest book, “Her”. The novel is the story of a young woman with Borderline Personality Disorder (BPD) who courageously peels back the layers of her complex and serious mental illness in a desperate attempt to understand it.

Johnson brings remarkable insight and understanding to an illness that affects 1-2 % of the population and wreaks havoc on the lives and relationships of young men and women. She has worked for nearly 10 years in the mental health field and she is an abuse survivor. She runs workshops and does keynote speeches on various topics, especially on working with and approaching friends, families and colleagues with mental illness. Her profound story and educational background is sure to inspire your audience.

While mental health issues are more freely discussed these days, it is still difficult to approach someone who might have a problem. But ignoring it is not an option. With courage and great hope, Felicia Johnson deftly portrays the struggles of a girl with borderline personality disorder in “Her” (8th Street Publishing). “Her” takes readers into the mind of someone who is suffering so they can get a first person view of a painful mental disorder,” says Johnson. “The story is an example of how, if we try to push the past away we are either doomed to repeat it or let it haunt us to our graves”

Johnson says, “The story is inspired by my life of survival and my childhood best friend, Holly, who suffered from BPD. Holly lost her battle with depression and BPD when she was 15 years old and took her own life. ‘Her’ also illuminates the harsh reality of child abuse in the home and the long-term psychological effects it has on everyone involved.” 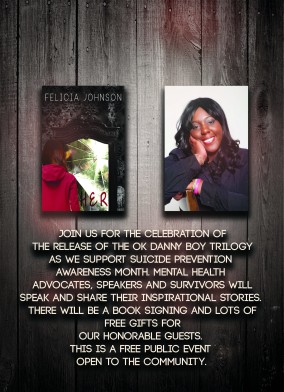 The spin off of “HER” is called “OK Danny Boy”. This trilogy follows the story of an artistic and mysterious young man who Kristen meets during her stay in Bent Creek Hospital. Daniel proved to be a supportive peer, whom Kristen saw as a positive influence throughout her recovery. However, Daniel had not always been a role model. Daniel is diagnosed with Bi-Polar Disorder, OCD and Juvenile Diabetes. His story follows his journey throughout his healing and learning to cope with life’s transitions, coming of age, living with mental illness as well as a physical illness and the suicide of a close friend. Fans of “HER” will get to see what it was like on the other side of the Adolescent Ward. Part one: “CHAOS” follows Daniel’s life before he goes into Bent Creek Hospital during his mental breakdown. Part two: “MONSTER” follows Daniel’s story while he is in Bent Creek Hospital through his treatment. Part three: “LOVE” follows Daniel after his treatment in Bent Creek Hospital into his recovery process.

The books can be purchased online through multiple retailers such as Amazon.com, BarnesandNoble.com and booksamillion.com. They are also available in bookstores near you.