Ted Ehelen Morning Show featuring Author Felicia. Mental health advocate, best selling author and international speaker, Felicia speaks to Ted Ehelen about what it takes to get rid of the stigma that is on mental health issues today.

Minnesota Lakeland News coverage of 2016 Evergreen Youth & Family Services, Inc. Conference. Featuring Best-selling Author & International Speaker and Mental Health Advocate, Felicia Johnson speaking at 0:38.
SCN Podcast EP12 – Mali Phonpadith interviews Felicia Johnson Using her own moving story of her survival from child abuse, homelessness as a teenager, and overcoming self-harm and depression, as well as her education in Psychology, Felicia raises awareness about mental health, self-harm, and abuse. She also promotes prevention of suicide by advocating for youth and friends and families of survivors.
Felicia Johnson is a member of The Women’s Speaker’s Association. Women Speakers Association (WSA) features expert advice from women leaders on #WSATV shows and #SpeakerChat on Twitter.”
Elaine is joined by guest host for the week Trenise Lyons, Goodwill’s marketing manager. Listen as they discuss mental illness with Felicia Johnson, author of the book Her and Kim Jones, Executive Director of NAMI Georgia.

Felicia’s great conversation with @TheresaInspires on ‪#‎MotivateMyLife‬ about mental health issues & why we should ‪talk about it.Click here

Barbara Bruce talks with the author and mental health worker Felicia Johnson about her past and what led her to become a youth mentor and novelist, championing mental health awareness.

Felicia, as mental health advocate,  spoke to The Goodness Geek about  the great personal strength it takes to stand up and be an advocate – how it can feel like  an uphill battle, the toll  it takes on a person, and how it can also  pay off in a big way. She shares tips for staying motivated and achieving your goals as an advocate for a cause.  “Click here to read the interview”
Felicia’s Book Her was reviewed in the October 2014 issue of NURSINGmatters magazine.
“Click here to read more”
Felicia skyping with Leave No Girl Behind  Int Girl’s Power Circle in South Africa. 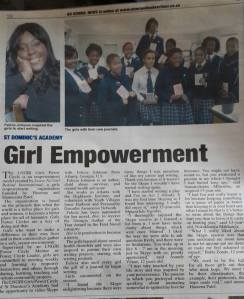 Felicia add her support to Bubbles Beyond Borders – a worldwide campaign to support the rights and dreams of girls and women globally.
“Click here”